Survivors is an Action-Ruins from Dark Ages. It is typically given out by Looters, but can be bought if it is the top card of the Ruins pile. When played, it lets you look at the top two cards of your deck and gives you the opportunity to discard them.

It gives you a little bit of filtering and looks at the top of your deck, and so combos with Scrying Pool

, just a bit. It's probably more useful in junked-up decks... such as those filled with Ruins. 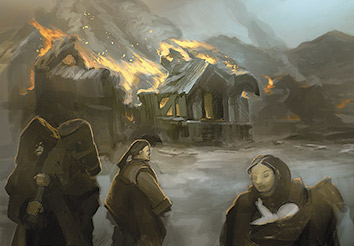 This is the only non-vanilla Ruins card. It is also the only one whose name and artwork aren't based on earlier cards.