Swashbuckler is an Action card from Renaissance. It is terminal draw that gets you Coffers and, if you save up the Coffers instead of spending them, will eventually get you its corresponding Artifact, the Treasure Chest 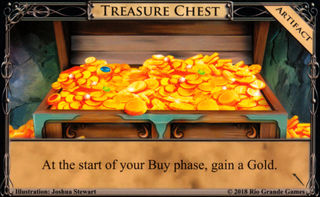 with the added possibility of coffers and an even more tantalizing prospect -- money doesn't get bigger than a guaranteed Gold every turn. However, its relationship with other conventional aspects of the Big Money strategy is finnicky. Drawing too many cards with non-Swashbucklers can eat up the discard pile (by reshuffling) before Swashbuckler has the chance to observe it. For similar reasons, it also doesn't work well with the Engine approach, especially deck-thinning. 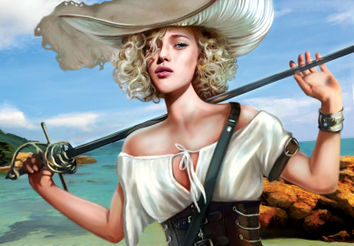 Swashbuckler is trickier. All that stuff after the colon only happens if you have cards in your discard pile - which is harder than it sounds. Part of it is, you draw the three cards before checking. The Coffers tokens don't have to have come from Swashbuckler specifically, so sometimes that helps, but you still need a discard pile at least once to get the Treasure Chest

An early poster child for the 2-sided States gave +3 Cards and added a token to the State (or took it if you didn't have it); when one side got 3 tokens it flipped over and gave you +3 Villagers, and when the other side got 3 tokens it flipped over and got you +3 Coffers and 3 Golds. It was called Jungle Explorer, and the state was Base Camp / Ancient Ruins. When the 2-sided States died, I tried to capture at least some of the spirit of the card, and this is how I did it.
—Donald X. Vaccarino, The Secret History of Dominion: Renaissance