Swindler is an Action-Attack card from Intrigue. When played, it makes all opponents trash the top card of their deck, and lets you choose what they gain instead. It can be a curser if it hits opponents'

-cost cards, but can also help opponents by skipping their Victory cards. It can be a very high-variance card, since if an opponent gets a

-cost card into a Duchy

! In the late-game, Swindler can accelerate the end of the game by trashing Provinces

and replacing them with Provinces from the supply.

One of the most hated

. If an opponent opens 5/2 and you turn their first

, that may very well decide the game.

Its attack is most powerful in the early game, since you have the best chance of hitting your opponent’s Coppers. Accordingly, it can be a good idea to open with two Swindlers: in exchange for the chance that they’ll be drawn together, I get to launch double the attacks early on, when the attacks are most likely to succeed and when losing Coppers hurts the most.

It works very poorly with Curse-giving attacks: when the Curses run out, a Swindler that hits a Curse or Copper ends up doing more good than harm. Really, Swindler doesn’t work well with most attacks: Ghost Ship

just lets your opponent choose your Swindler target, and Bureaucrat

-> Swindler can be a guaranteed way to hit a Victory card, which is ordinarily terrible (though it can sometimes be of value in the endgame — see below). Even discard attacks like Militia

are weakened, since forcing your opponent to discard Swindled junk doesn't hurt them much.

in a very odd way. If Peddlers are still available, buying Provinces

is very dangerous since they can be so easily trashed into a Peddler. On the other hand, if Peddlers are emptied, then Swindler becomes a serious liability, since you can easily accidentally Swindle your opponents’ Peddlers into Provinces!

Likewise, playing Swindler is dangerous if you are trailing in the endgame. If you want the last Province and you already have

in your hand, don’t play the Swindler lest you swindle your opponent’s Province … into the last Province. On the other hand, if you’re leading, Swindling Victory cards can be a great way to run the pile down.

This incidentally suggests that one of the best counters to Swindler is playing for VPs quickly: both because Swindled Provinces help you, and because if Provinces are going to run dry quickly then you want to grab your early share. This is a special case of the more general counter, which is to buy cards that either have no crappy terminals at their cost (i.e., avoid

′s when the only

), or buy cards that have unique costs (e.g., Gold 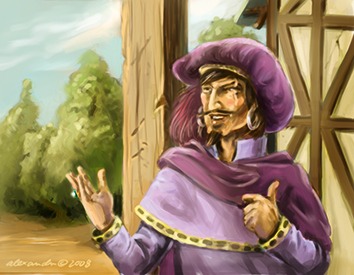 A cursing attack that cost

didn't make the grade, and I needed a replacement. This card from the 4th set fit the bill. Originally it was "Each other player trashes the top card of their deck and gains a card costing

less that you choose." Hitting Copper all the time made it very weak. I changed it to "a card with the same cost" and that made it a lot better - now Coppers turn into Curses. That's the version that got added to Intrigue, and it was tested a bit like that but was still pretty weak. I made it good enough by adding the +

. The attack part is nice but needs that much help.
—Donald X. Vaccarino, The Secret History of the Intrigue Cards