Taxman is an Action–Attack card from Guilds. It forces opponents to discard a copy of a Treasure that you trash, and then allows you to upgrade your trashed Treasure.

Below are some basic comments about Taxman. For a more comprehensive article, see this forum thread.

Taxman combines a discard attack with upgrading of treasure. The trashing and upgrade is similar to Mine

but the top-decking is much slower than placing the treasure directly into the hand. The attack is a little like a Cutpurse

that can keep its value slightly later into the game, but that is not cumulative. As a card that conveys no benefit on the turn on which it is played, it tends to slow down the game.

The attack is highly situational; it can at most cause the discarding of one card. Early in the game, the attack is a sure hit as you use the card to trash coppers; later, switching to trashing silvers can provide a stronger attack against opponents who reliably draw silver, but the attack is weak against decks with less treasure. Drawing Taxman with Silver early in the game, like on the third turn, can produce an apparent conflict--the Silver attack is less likely to hit, but more devastating if it does, and upgrading the Silver is more valuable.

Because of the 5-card limitation on the attack, this card is much less devastating in multiplayer games than Cutpurse is. 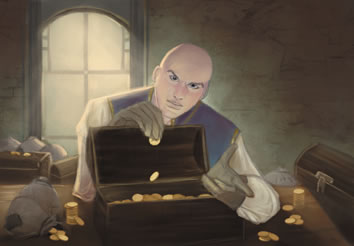 This started in Cornucopia, based on an idea that didn't go far in Alchemy. For the Cornucopia version, the discarding was not limited to players with five+ cards in hand, and the treasure you gained didn't go on your deck. It was painful and not good enough. In Hinterlands I tried a version that gained you two cards. Finally it moved here and I fixed it up. It's a lot of words, that's like a theme of this set. It does a fine job of feeling like a new attack though, and well that's what that takes.
—Donald X. Vaccarino, The Secret History of the Guild Cards