Teacher is an Action-Reserve card from Adventures. It can move any vanilla bonus token to any Action Supply pile that does not already have one of your tokens on it. It is not in the Supply, but can be exchanged for from a Disciple

. There are only 5 copies of Teacher in the Teacher pile.

† The Second Edition Adventures rulebook has a mistake here.

There is no strategy article for Teacher, but the Peasant

Teacher gives out bonus tokens, and it is the only way of doing anything with those tokens outside of the respective Events - Pathfinding 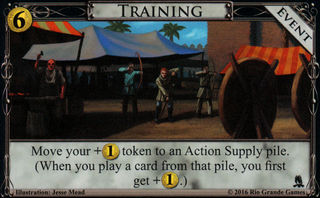 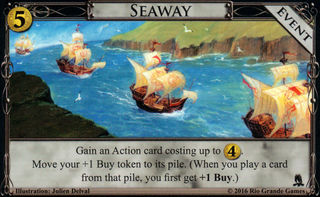 . Teacher is a very slow card - it takes five shuffles just to get one, and it's a Reserve card, so you can only start to do anything with it another turn later. However, once you start handing out those tokens, your engine will explode.

Teacher does have a restriction that the Events do not: you can't put more than one token on the same pile with Teacher. On the other hand, you can put a token with an Event on a pile where Teacher already put another token on. This makes an already pretty insane card even stronger. In addition, Teacher does not have Seaway's cost restriction, and can put your +1 Buy token on cards with

Which token should you place first? It depends on the board, of course, but in general, the +Card token is the strongest one (which is why Pathfinding is the most expensive Event). When used on cantrips, even the weakest cards, such as Pearl Diver

variants. When used on non-terminal draw such as Laboratory or Hunting Party

, it's even better: these cards become twice as strong, as each play increases your handsize by 2 instead of 1. It is advised to use the tokens on cards that are already in your deck; grabbing them after placing the token is just too slow.

. In this case, you'll have to be careful when you add these terminal draw cards to your deck: too early and you'll suffer from terminal collision, but too late and you won't get to use them.

If you're already drawing your deck easily, but feel that you need more terminal space, you can also use the +Action token on other strong terminals you want to play a lot of in one turn. Cards that come to mind include Bridge

After dropping down your +Card and +Action tokens, the game is often close to over, so you might not even have the time to use the +

and +Buy tokens anymore. If your engine happens to lack +Buy, but drawing your deck has never been an issue, you can opt to use the +Buy token first. Otherwise, look for some other kind of +Buy - in a pinch, Peasant 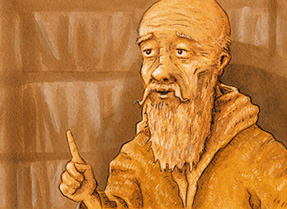 Teacher wasn't a Reserve card originally. It got that to slow it down a little. Once you start giving out +1 tokens, your deck explodes.
—Donald X. Vaccarino, The Secret History of Dominion: Adventures