The chief danger of terminal draw cards is their ability to draw other Action cards dead—i.e., to draw them without sufficient Actions remaining to play them.

These cards only provide a total of +2 cards, but allow some filtering or sifting to help you draw the cards you want.

These cards' principal functions are something other than terminal draw, but they provide +2 cards as an additional vanilla bonus in order to ensure the cards' effects are balanced and competitive with other cards at the same price.

, from Seaside, arguably could be placed in this category as well.

, from Cornucopia, is not usually thought of as a terminal draw card in that it gives +2 cards but also discards two cards, causing a decrease in net handsize; however, of course it can still draw other Action cards dead. Similarly, Mercenary 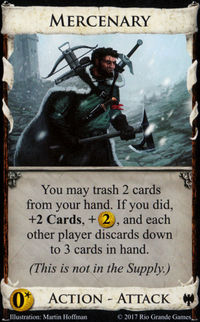 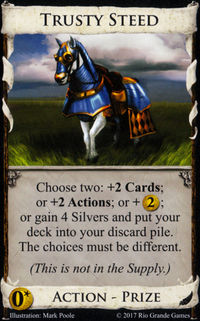 , from Cornucopia, sometimes gives terminal draw but can also give non-terminal draw and many other possibilities.