Thief is an Action-Attack card from the first edition of the base set. It allows you to "steal" Treasures from opponents by making them trash treasures from the top 2 cards of their deck and then letting you gain them. It can be great when your opponents have trashed all of their Coppers

and gained other Treasures, or when you have multiple opponents, but not so good when you're likely to be trashing your opponent's Coppers for them; it also gives you no bonus on the turn you play it. It is similar to Noble Brigand

from Hinterlands, which addresses these weaknesses.

It was removed from the second edition of Dominion. Its successor/replacement is Bandit

Currently, there is no Thief strategy article.

Thief is typically a very weak card, and was at one point voted the Worst

card. (It later lost this spot to Scout

). Thief appears strong to many new players, who remember the times Thieves stole their Gold but forget the times Thieves cleared out all their useless Coppers. In practice, Thief is often very weak for the following reasons:

So in many cases, Thief is unlikely to hit anything good; the cases where Thief is likely to be good are listed below in the Synergies section. 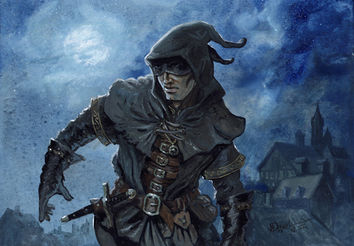 This is the only card that Valerie and Dale changed (other than non-functional wording changes). Which is of course just the way I would have wanted things - I mean who wouldn't? They had no compulsion to make changes for the sake of changing things; they complained about a few weak/confusing cards that just left, and everything else but Thief ended up the way I made it. Anyway Thief originally revealed the top 2 cards, then put the untrashed ones back. Valerie didn't like how, if you got hit with Thief and your top 2 cards were non-Treasures, then subsequent Thieves would also get nothing. Also there was the issue of remembering the order to put the cards back. So they changed it from reveal to reveal-then-discard. I was initially skeptical but in the end I think it was a good change.
—Donald X. Vaccarino, The Secret History of the Dominion Cards

It would be nice if Thief were stronger, but it already scares new players, and once everyone was new.
—Donald X. Vaccarino, What Donald X. Might Do With a Dominion Time Machine

This is one of the weakest cards in the game. I mean you knew going into this that some of these cards were going to have to be some of the weakest cards, that was a reason for replacing them, but well Thief is way down there. New players are scared of it, maybe it will eat all of their Treasures and shut them out. Then you realize you aren't choosing to gain the Coppers and in fact are happy to lose them. Then you stop buying Thief. It ends up sometimes useful in games where you actually want Copper

games), or games where your opponent is relying on Treasure but trashed their Coppers, or sometimes with special Treasures in expansions. But uh, most games it just sits there. I could do better. You can argue that Thief provides a certain learning experience, that there's real gameplay in learning that the card is weak the hard way; but other cards can provide learning experiences that leave the cards contributing more once they're figured out.
—Donald X. Vaccarino, The Secret History of the Dominion 2nd Editions