and two copies of that Action card. It's great when you have lots of Action cards and are sure you'll be able to draw Throne Room in hand with a good Action, but be careful—if you buy it too early, or when you have too many Treasure and Victory cards and not enough Action cards, you'll have no Actions to play with it and it'll be a dead card!

In the first edition of Dominion, using Throne Room's ability was mandatory if Throne Room was played. Donald X. Vaccarino revised the card because that offered no provision for keeping the player honest: if a player claimed that they had no Actions in hand, and that was why they weren't activating Throne Room's ability, there was no way for their opponents to verify that this was the case.

There is no strategy article on Throne Room.

Throne Room is a powerful addition to most decks with a high action density. It's weak in games where you might draw it without any good actions. It's typically not a good buy on turn 1 or 2, since you won't yet have good actions to Throne Room.

Throne room as a village

In the presence of cards that give +1 Action, a Throne Room can be used as a makeshift Village. Cantrips are especially useful to this end, as they replace the two cards played, leaving an additional +2 Actions.

In some cases, the combination of Throne Room and cards giving +1 Action can be used to construct a viable engine that would normally require Villages, on boards without any Villages. As with most engines, trashing is important.

Throne room as a replacement for cards that run out

In some games, there is a race to grab certain cards before the pile empty, like Minion

, cards that you want to play as many copies of as possible per turn. If the density of these cards in your deck is high enough and your deck sufficiently thin that you draw one of these cards each turn, Throne Rooms can act as a "substitute" for these power cards. This benefit is especially useful because you can pick up the Throne Rooms for cheaper than the desirable cards.

Donald X posted his thoughts on combos with the Intrigue cards:

right there. Baron can offer you the chance to buy Provinces

at earlier points in the game than you're used to - as soon as turn three, off of a Baron / Silver

: This is one of the ones you really want to Throne Room. One of my playtesters had a turn that went, Throne Throne, first Throning Bridge, then Throning Bridge... buy 5 Minions

. Maybe it's a better story if you know what all these cards do. Anyway Throne Room / Bridge, that's one people really go for.

: The beauty of this combo is just that it's insurance. You don't want to draw Throne and have nothing to Throne with it. Great Hall helps you reduce the risk of drawing a dead Throne.

: The second time Masquerade goes off, everyone just passes the card they got passed the first time. It's certainly fine to be drawing four cards and trashing two things and passing two things, but it doesn't hurt the other players any extra the second time. 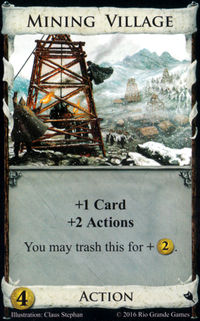 from one Mining Village this way.

for the first one, then get a new hand with the second one and take it from there. Better is to draw first, that way if you get a dud draw you can draw a second time instead of your +

. There are other options though. Minion is a combo with itself, so Throne / Minion is a fine path to be on. (I corrected this in a reply to the BGN article; obv. you take the new hand first.)

: This is a strong one. Typically you take +3 Cards the first time, then pick Actions or Cards based on whether or not you have more actions to play.

: Throning Pawn lets you pick one of everything, and get Market

the hard way. I don't really recommend that. Throne the most expensive card you can, that's my advice. Still, you work with what you've got.

: Expensive attacks are usually some of the more exciting things to Throne Room. If you can get enough Saboteurs played, you can stop the other players from getting anywhere. Of course that doesn't just happen easily, because, well what fun would that be.

: No-one wants to get Tortured twice, but when it happens, at least you can gain a Curse

the first time, then discard the Curse with something else the second time. 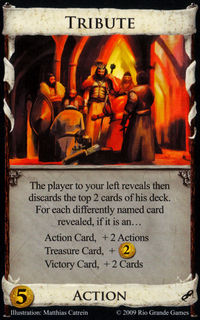 : This could get you anything from nothing (hitting four Curses), to +8 Cards +

twice). You may get unlucky and hit duplicates, or hit actions when you can't use them, but this turn is probably going to be pretty impressive.
—Donald X. Vaccarino, Dominion: Intrigue Preview 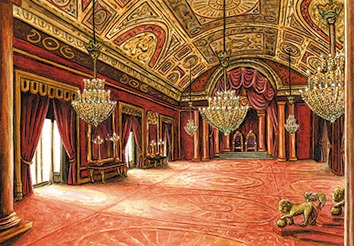 For most of its life this card cost

combo). Later in the game it doesn't matter as much whether it costs

's, but we decided we could live with just having four. There's Silver at

, so it's fine to sometimes deal out a random 10 and not get a

.
—Donald X. Vaccarino, The Secret History of the Dominion Cards

Throne Room should of course say "you may."
—Donald X. Vaccarino, What Donald X. Might Do With a Dominion Time Machine