Torturer is an Action-Attack card from Intrigue. Keeping with the choices theme in Intrigue, Torturer gives opponents a choice! They can either take a Curse

, putting it in their hand, or discard 2 cards. Since it also gives +3 Cards, a Torturer chain can be a devastating strategy; if you are faced with one, remember that sometimes you need to accept Curses so you can get a turn with some cards still in your hand!

Probably the best-named card in all of Dominion. Like a true sadist, the choice that Torturer offers somehow manages to make the card even crueler, as you futilely discard hand after hand, hoping to avoid those Curses.

Torturer is only effective if you can play multiple Torturers on a single turn. Unsurprisingly, Torturer is therefore a card that depends heavily on “villages” (any card that gives +2 Actions). Without them, Torturer is a lousy card and not worth the

in a 2p game. Even with villages, as CouncilRoom.com demonstrates, the price point of the villages greatly impacts the efficacy of a Torturer chain:

villages: There’s almost certainly not a better strategy out there than a Torturer chain. Depending on how quickly you can get Curses into play, though, you might be able to beat a Torturer chain by handing out many of the Curses first with Sea Hag

. Otherwise, pretty much your whole game is going to be buying Torturers/Villages and being the first to trigger the Torturer chain. The usual principle of Fishing Village

being absurdly good in such decks remains.

villages: This is a tough sell, first because your villages are now quite expensive, and second because it directly clashes with Torturer. In other words, with Fishing Village, you can get Torturer when you draw

and Fishing Village when you draw less than

, you don’t have that option. On the other hand, your

is the best example, because when Torturer runs out of ammo the Cities get upgraded. Likewise, Bazaar and Festival

give you money, which is critically important in a deck where you want as little Treasure as possible. I wouldn’t go for this combo with another Curser on the board, however, or in very fast-paced games.

villages: Ordinarily, this wouldn’t be at all sensible, because

is just too much for a village. Nobles

/Torturer, for instance, probably isn’t a winner. But Border Village

is a very special case, since it essentially lets you grab both pieces of the combo at once. With Border Village, I like to open with a Torturer, get a Gold, and then start buying Border Village and picking up Torturer.

Within the Torturer chain, the power of Torturer is really the +3 Cards. Without it, a Torturer chain is just a weaker set of Witches. But because it can draw so well, a Torturer chain will draw the whole deck repeatedly so you can Torture on every turn. You can’t do that with Witch without massive trashing.

When setting it up, your main focus is therefore to get your engine running as soon as you can. Torturer chains tend to have a runaway leader problem. Whoever is first to play the second or third Torturer in a row will deal a crippling blow to their opponent, thus impairing their own chances of setting off the Torturer chain. It is therefore very important that you buy as little Treasure as possible while building your Torturer chain; you only need enough Treasure to buy your engine parts; you can focus on getting the money for Provinces after you start playing multiple Torturers.

The best way to build your engine is to roughly balance the ratio of villages to Torturers, with slightly more emphasis on the villages than the Torturers (since a hand of 5 Villages is better than a hand of 5 Torturers). If you look at the “progressive” chart in the Fishing Village / Torturer card ratios graph (once CouncilRoom comes back online), you see that the ideal village-to-Torturer ratios during the game are around one more Fishing Village than Torturer.

is a good play when your opponent discards, though of course not such a good idea when they chose to gain the Curse!

, as with most attacks, is the best counter to Torturer. Watchtower

does too, but might get in the way of your own Torturer chain (and Trader

can help salvage a turn where you had to discard all your cards, since it gives you five more cards at the start of your turn. Plus, you can discard freely to the first Torturer if you were planning on playing Tactician on your next turn anyways. Just remember that you cannot discard down to a single Tactician in hand if you want to get the effect. Tunnel

makes Torturer a real liability even after the Curses run out. The fact that Torturer gains to your hand is a somewhat subtle weakness: it makes it a bit worse than Witch because someone with Trading Post 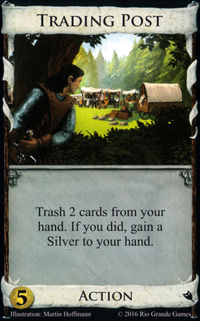 or other trash-from-hand cards can just trash all the Curses immediately without it ever entering the deck.

More generally, as alluded to above, attacks that give out Curses are a lot faster and more reliable than Torturer. Just like how Witch beats Mountebank

Barring those specific counters, I tend to take Curses whenever it doesn’t change what I was going to do on my turn. I don’t discard engine parts, but I will discard Treasure if there’s a decent chance I’ll draw enough on my Torturers to buy what I want. If I know that I’ll be hit again with the Torturer, then I’ll take the Curse. As the quote below suggests, if you’re discarding your hand every turn, then either you didn’t have much hope to begin with, or you shouldn’t have any any more.

Note that in multiplayer, Torturers become ridiculously, stupidly more powerful. Even without +Actions, you might get multiple Torturers played on you in a single turn. Without Lighthouse or other hard counters, I will almost always race for a Torturer chain while having little choice but to take Curses.

A final rules clarification: yes, if Torturer runs out of Curses to give out, then the attack is meaningless. You can discard if you want to, but you can also just choose to take a Curse (unsuccessfully). But don’t feel too bad for the Torturer: after all, he’s got a +Actions/+Cards engine set up in the meantime… 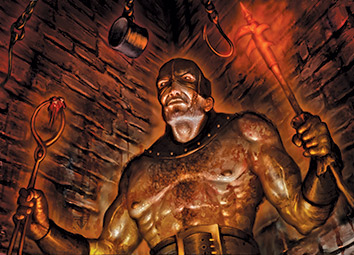 One of the cards added when going up to 25. I had a "decisions" theme, and wanted a card that gave your opponents a decision. This is a pretty basic implementation of that concept. The set had had another such card in Envoy

, but that left for being too redundant with Smithy

. This card also gives you +3 Cards like Smithy, but adds something to the game in a way that Envoy didn't. I am avoiding giving strategy advice in general, but I am going to have to give some here. I had a game in which one of my friends stood up, enraged, and went into the other room to calm down. This card was the reason. Don't let it happen to you! The secret to happiness is, do not simply refuse to take a Curse no matter what. Sometimes, you have to take that Curse. Discarding five cards and passing is not the path to greatness. You've been warned!
—Donald X. Vaccarino, The Secret History of the Intrigue Cards