Treasure Hunter is an Action-Traveller card from Adventures. It gains you a Silver

for every card the player to your right gained during his last turn. It is not in the Supply, but can be exchanged for from a Page

. Treasure Hunter itself, once discarded from play, can be exchanged for a Warrior

There is no strategy article for Treasure Hunter, but the Page

Treasure Hunter is a good card if you want to get a ton of Silver. Since every gain from your opponent in their previous turn gives you a Silver, the amount you get can add up pretty quickly; I've personally gotten up to eight Silvers with a single Treasure Hunter. Unfortunately, you usually get Treasure Hunter because you want to go for Champion

, which means you're probably playing an engine, which means you actually don't want to have too many Treasure cards. In conclusion, most of the time you don't actually want Treasure Hunter when you get it; you just want to get it into play and exchange it for the much better Warrior

Of course, Treasure Hunter is pretty strong with Feodum 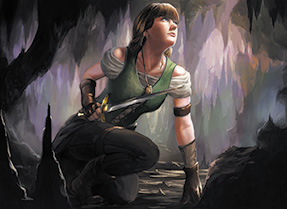 Treasure Hunter was another very old card, which had had various forms in different sets and never quite made it; there were always players saying, is this fun thing really as good as it gets. Such is human perversity. Here at last was a place for it where the casual players who liked it could enjoy it while not taking up too much room for the haters.
—Donald X. Vaccarino, The Secret History of Dominion: Adventures