Treasure Trove is a Treasure card from Adventures. It is a gainer, giving you a Gold

There is no strategy article for Treasure Trove yet, as Adventures is still quite new, and the community is still discussing how best to use it. If you have ideas, please share them on the forum!

Many cards in Adventures favor strong engines. Treasure Trove is a big exception to this rule. It gains you a metric ton of Treasures (hence its name), clogging up your deck if you want to build any type of engine, but drastically increasing your money density in Big Money and slogs. It should, in the vast majority of cases, not be bought in engines at all, as even with Storyteller

your engine will just not come together, but its sheer power as a Big Money and slog card can definitely make you reconsider some of the weaker engines. One exception to the 'don't-buy-it-in-engines' rule might be when you are overdrawing your deck, you need a lot of payload quickly, and there is strong Copper trashing available.

How many Treasure Troves do you want? In Big Money, you usually don't want more than two; by the time you get two, you might already be almost ready to green. In slogs, you might want a couple more. I've personally gotten up to five Treasure Troves on a board with Duke

without trashing, and managed to win while ignoring Familiar. 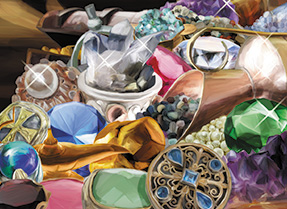 This was another case where I wanted to use a particular name. I also liked the idea of the set having three Treasures. Another Treasure Trove didn't work out. I tried one that gave you a copy of another Treasure you had in play; then tweaked that into always giving you a Gold and a Copper.
—Donald X. Vaccarino, The Secret History of Dominion: Adventures