. Tribute is a difficult card to use because of its unpredictability, and it works best with dual-type cards.

There isn't an article for Tribute; it was briefly discussed on the forums.

Tribute can be a strong card, but its strength is heavily dependent on both your opponents' deck composition and your strategy, and its benefits are mitigated by its unpredictability. The three benefits of Tribute are not equal: in general, +2 Actions is weakest, and the other two benefits are closer in usefulness. The card draw is usually the strongest benefit, but is only useful if you draw treasure or action cards with actions remaining. Tribute does cycle your opponents' deck, providing them a modest benefit. But its biggest weakness is unpredictability, since you don't know whether you'll get something great (but terminal) like +

Tribute works well against an opponent playing a Big Money strategy, where it has a good chance of giving +

for a card that costs

is a good deal. In the presence of dual-type cards, like Harem

in the opponent's deck, Tribute becomes very strong. Even hitting one mixed-type card, getting something like +2 Cards, +

is an immense benefit from playing a single card, especially one that only costs

Tribute is usually weakest when playing against action-rich engines, such as heavily-thinned decks. Not only is the action benefit the weakest or least useful benefit of Tribute, but the fact that it is unpredictable makes it so that Tribute cannot function as a reliable village. 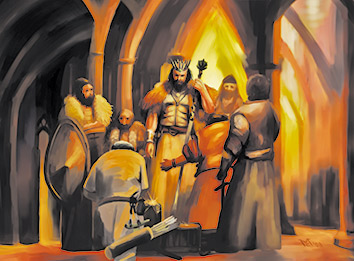 I took this from the 4th set, as a natural fit here due to the cards with two types. The original version had each adjacent player reveal their top card. I changed that to one player so it would work in 2-player games, and then changed it to discard when Thief

changed to discard. Once it changed to discarding it could have gone back to hitting adjacent players and would have worked in 2-player games. I kept this version though, because it seemed a little more interesting, and because the player to your left is more likely to not be shuffling. Also the original didn't say "differently named," but that was essential to keep the card from being too strong early in a game.
—Donald X. Vaccarino, The Secret History of the Intrigue Cards

This isn't that good, but is better than most of these cards. It's not popular though. Hosing Nobles

is not great. Some people feel like it's attacking them, since it can flip over good cards; I think it tends to help as much as hurt, but so what, I don't need people to feel bad over a non-attack. I'll say it for everyone: it wasn't the greatest card in the world; it was just Tribute.
—Donald X. Vaccarino, The Secret History of the Dominion 2nd Editions