Triumph is an Event from Empires. For a cost in Debt, it gives you a

token for each card you've gained that turn. The points come with an Estate

, though, so using the Event too much will still clog your deck.

Triumph has both a

token payout. It's like a Victory card that rewards you for getting a lot of cards in one turn, and is represented in your deck with an Estate that you can maybe get rid of. The

cost helps you afford it after buying other cards; and hey, if you don't think you're getting another turn, why not go out in

This started out as an Action for

per card you'd gained that turn (yes, looking a bit like Emporium 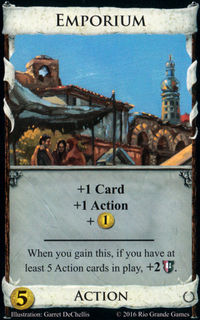 ). It was fun going nuts with it and so I tried variations - a Woodcutter

version; one that gave +1

per 2 cards gained. Then I made it a Victory card worth 1

per card gained that turn. That version was nice. But some games it's just sitting out, you don't have the combos. Space was limited and it could just be an Event. So there it is.
—Donald X. Vaccarino, The Secret History of the Empires Cards