Trusty Steed is an Action-Prize card from Cornucopia. It is not in the Supply, and can only be gained through playing the Tournament

card. It is a versatile all-around card which can give +Coin, terminal card draw, a Village effect, a Laboratory

effect, or discard your deck and flood it with Silver

. It's often the second Prize to go after Followers 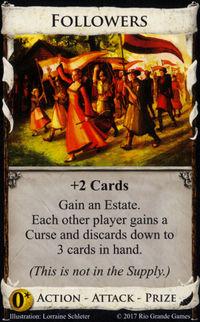 Choosing +2 Cards/+2 Actions is always very tempting and safe, but unless you use those Actions, you've just played a valuable Prize as a Laboratory

. With careful deck tracking, you can make use of +2 Cards/+

for good payouts. The option to take 4 Silvers

early without a good economy. 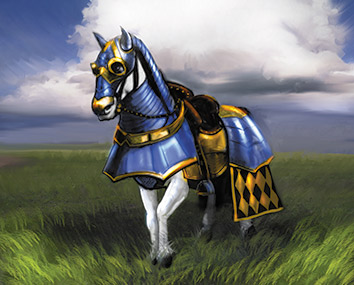 The first set of Prizes was less exciting, and people complained and I excitified them. Trusty Steed gave you +2 Cards and +

, no choice. At one point Trusty Steed also gave you +2 Buys when you picked +2 Actions...
—Donald X. Vaccarino, The Secret History of the Cornucopia Cards