Upgrade is an Action card from Intrigue. It is a cantrip trasher, since it gives +1 Card/+1 Action and can trash one card, letting you gain a card costing

more. Since there are usually no cards costing

, this is an effective way of trashing Coppers, as well as Upgrading Estates

Original article on the forums by Mean Mr Mustard.

One of the strengths of Upgrade is the cycling ability that comes with it being a self replacing non-terminal. Terminal trashers such as Remake

can be powerful trashers, but sometimes buying and using them can fatally slow down the tempo of deck progression: a turn buying or using one of them will often yield no other benefit.

Upgrade rarely is an outright bad buy in the first four turns, as there are not too many Kingdoms that will be hurt by the easy trashing of Coppers

scenarios might not benefit from Upgrade and on scary Big Money boards Upgrade may be a deadly distraction, but on the whole it is a very strong card, especially if the Kingdom has

, although even Wishing Wells

and Villages can be great targets for Upgraded Estates.

It is certainly possible to go too far and buy too many Upgrades. There are times, however, when it makes sense to buy multiple copies going even into the mid-game. Remember, extra Upgrades can be easily converted into Gold in turn 7-10 to make a strong push into the VP buying stage of the game. This is board dependent. In non-treasure setups it can be a very strong play to buy multiple Upgrades in order to quickly cycle and kill the starting cards. Multiple Upgrades can also help against Cursing attacks, if you can stay on top of it and not let your opponent get too far ahead. 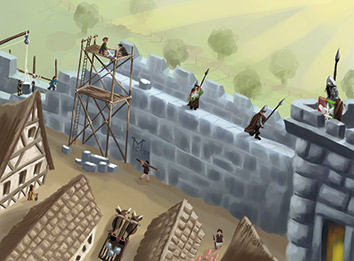 A very old card. I explained how it once cost

in the entry for Great Hall

. The "exactly" part actually makes the card better, as it lets you trash Curse and Copper without gaining anything.
—Donald X. Vaccarino, The Secret History of the Intrigue Cards