Vault is an Action card from Prosperity. It is a soft terminal draw card; it gives +2 Cards, then lets you discard any dead cards from your hand to get +

for each such card. In exchange, it gives your opponent a minor cycling benefit, letting them discard two cards to draw one.

. Its true strength lies in the discard-for-coin benefit. It is interesting to note, however, how powerful the combination of drawing 2 cards and then discarding for benefit is. The other card with this benefit, Secret Chamber

, and Vault gives opponents a benefit--yet at

, it is still a powerful card.

Vault is particularly strong in the presence of Grand Market

; not only does it enable you to use Copper

indirectly to buy a Grand Market, it guarantees a Grand Market purchase any time you draw Vault. (in the absence of a handsize attack)

. However, Vault can still be useful as a later addition to some engines constructed with the aid of these trashers, as described below.

Because the cards are discarded, not played by Vault, you are able to reshuffle these cards into your deck and draw them again after discarding. When you are able to draw your whole deck, Vault provides one of the few ways to derive coin from the same cards multiple times in one turn. This benefit can be substantial in deck-drawing engines, as it provides a way to add buying power to a deck without adding treasure: each additional card can potentially increase buying power by more than

The benefit of Vault to your opponents is very different in Big Money type games vs. engine games. This benefit tends to be of little use in Big Money games: discarding two coppers risks drawing another copper or Victory card, and provides no benefit unless drawing something better than a Silver

. If your opponent is also playing Vault/Big Money, the discard is even more likely to cost them

. In engines, however, the discard can increase the chance that a person starts with enough +Actions and +Cards to draw their deck or start off their engine.

Vault makes for a fairly powerful Big Money strategy; whenever you draw Vault you are guaranteed to be able to buy a Gold

, and whenever you draw both a Vault and a Gold together you are guaranteed to get a Province

. It is also very resilient to greening, since the rest of your hand does not matter as long as you draw a Vault with a Gold, so you can expect to get some Provinces even if you dip in to Duchies early. The benefit to the opponent is also negligible if your opponent is also playing a Big Money strategy. This strategy is particularly viable on

openings, as it almost always guarantees a Gold on turn 3 or 4.

Because it only draws 2 cards, Vault and Village alone is not usually able to build a viable deck-drawing engine. If your opponent is also playing an engine, your Vault is also likely to benefit them more. However, Vault can be a useful card for many engines. In draw-up-to-X engines, such as with Watchtower 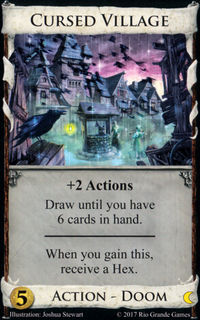 , Vault can empty the hand while producing a benefit, which not only allows for more draw, but derives benefits from cards sent to the discard pile where they can be reshuffled into the deck and re-drawn, possibly to be discarded again by another Vault.

Vault can also be a useful supplement to Scrying Pool

, allowing one to benefit from the discarded actions. This is particularly true in the case of ruins, as the ruins can be drawn as actions by the Scrying pool and then discarded for

In conventional deck drawing engines, Vault can be useful for deriving extra

out of starting Estates

or other Victory cards, as well as for unused Villages or drawing cards. In these decks, only one Vault is needed, and it is important to not rely on the Vault for the initial drawing, but to only play it after the whole deck has been drawn. However, if your deck has an excess of drawing power, additional Vaults can be useful to discard cards that can be redrawn.

in a double Tactician deck, as the last move before playing the Tactician. A deck which consistently draws Vault+Tactician will guarantee a Province buy each turn. 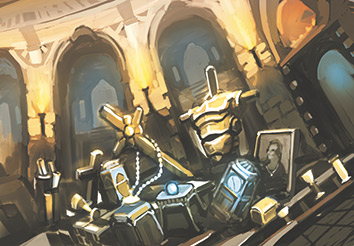 The main set once had a card called Vault that was just "Discard any number of cards. +

per card discarded." The top half of Secret Chamber. It cost

and then it was Secret Chamber. Actually the oldest version was like "victory cards are also coppers this turn," but discarding cards is more flexible and way less confusing. Anyway the original mechanic was just not that good, as evidenced by Secret Chamber getting an additional ability and only costing

and still being nothing special. But tack on +2 Cards and you've got a monster. For a long time it had no penalty, but it was just too good.
—Donald X. Vaccarino, The Other Secret History of the Prosperity Cards