This page is about the card from the Base game. For the class of related cards with similar effects, see Village (card category).

Village is an Action card from the Base set. Village gives you +1 card from the deck and +2 actions, allowing you to play more than one terminal action each turn. This enables complex strategies and engines. Other cards which give +2 actions are also referred to as villages (and often have "village" in their names), with Village being the simplest and the first that most players experience.

There has been no comprehensive strategy article written on Village.

This is because Village does not, by itself, constitute a strategy; Village is an enabler for other strategies that use "terminal" actions (actions that do not give +1 action). How to use Village will depend entirely on the terminals that you wish to play with the extra actions that Village gives you. For example, if you have a Laboratory

engine and just want to play two terminals at the end of it, then you want to buy only one Village, and probably buy it fairly late in the game, after you are already drawing your whole deck; on the other hand, if you are building a Village/Smithy

It may seem that Village is always a good card to have, since it gives +1 card and you're never sad to draw a Village in your hand, it just replaces itself. However, this gut feeling is not right. It still takes a turn to buy a Village, a turn where you could have bought something else which gets you closer to buying Provinces

; a card which only replaces itself is usually a bad card to buy. So even though you never mind having the Village in your deck, many times Silver

is a better buy. A player who buys too many Villages when terminals or Treasures would help their deck more is jokingly referred to as a Village idiot.

Since Village gives you no benefit until you have at least two terminals to match it up with, it is almost never the right play to open with Village on turns 1 or 2 in a 2-player game. 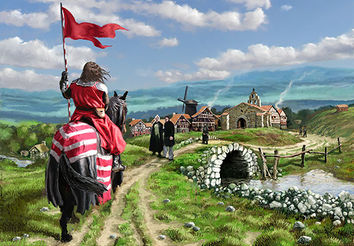 In common lingo, people may refer to any card which gives +2 actions as "a village", calling the Village

card a "Vanilla Village", to distinguish it from the many other cards which give +2 actions and some other bonus.

The art for the Dark Ages card Pillage

is based on Village, as is (in part) that of the Alchemy card Scrying Pool

This got better and better during the very early days of the game. One of my friends always went for Village and could not win a game. So over the first few weeks I gradually improved it to its current level. It's cool to see people arguing about whether it's too good or not and well I guess to keep that interesting I should avoid commenting myself. *whistles*
—Donald X. Vaccarino, The Secret History of the Dominion Cards