Village is the informal generic name for the family of Dominion Kingdom cards which offer the ability to generate +2 (or more) Actions—so called because many of them have "village" in their names. The simplest and most vanilla village card is Village

itself. Typically, these cards will also offer +1 Card as well, but there are some village cards which will offer other benefits instead. Cards that do not explicitly or usually give +2 Actions are sometimes called pseudo-villages.

Every Dominion expansion has at least one village.

For some cards, +2 actions is an option you can choose when playing the card, not an automatic effect. In the lists below, these cards are italicized.

These villages replace themselves in the hand by drawing at least one card when played—thus ensuring that the mere presence of the village in your deck doesn't prevent you from having in hand the terminal Actions you want to play it with.

These villages do not replace themselves in hand when played, which can sometimes make it more challenging to line them up with the terminals they need to support.

, from Cornucopia, draws a card when played but must discard a card from hand to activate its village effect. Since it thereby reduces handsize, it fits well into some of the same engines that disappearing villages are best suited to.

These cards provide +2 or more actions sometimes, and the player cannot always control whether they will; how reliable they are as engine components may therefore vary greatly from game to game.

These cards cause you to make 2 or more additional plays of Action cards without actually giving you +2 Actions (though the cards they play for you might do so).

Donald X. Vaccarino has explained that the reason cards that give +2 Actions are often named after "villages" or other populated places (e.g., City, Hamlet) is because extra Actions are thematically represented by "a group of people doing things for you". The only cards that always provide +2 Actions but whose names do not represent populated places are from Dark Ages: Dame Molly, Madman, and Wandering Minstrel. 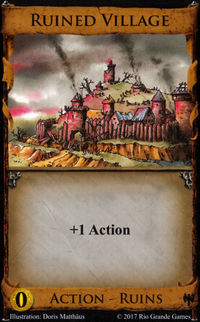 is the only card with "village" in its name that does not provide +2 Actions; as a Ruins, it is notionally a village that has been stripped of most of its ability.