Werewolf is an Action-Night-Attack-Doom card from Nocturne. It's a terminal draw card during the day (i.e., your Action phase), but can also be saved for the Night to inflict Hexes on your opponents. It is the only card with a full pile to have four card types.

In an engine deck Werewolf becomes useful because if you draw your entire deck, and still have Werewolves left over, you can use them in the Night phase. In Big Money games, Werewolf functions as a soft terminal, allowing your deck to sustain more of them than similar draw cards such as Smithy 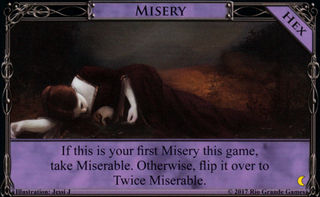 or curses may be the difference between victory and defeat. 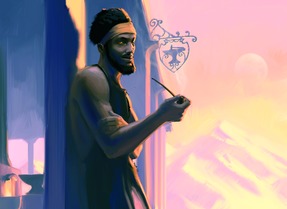 Werewolf is an Action-Night card. During the day he's just a Smithy

When Night debuted, I figured there would be a bunch of Action - Night cards. I had one early on but it turned into a pure Night card and then died. When it stopped being Action - Night, there was a vacancy, and why not have a Werewolf? I mean there's your Action - Night card. At first it was phrased like Crown

, then it was tweaked to what it is, which is maybe slightly simpler. I realized it would be neat to have it interact with Silver

, but did not manage it.
—Donald X. Vaccarino, The Secret History of Dominion: Nocturne