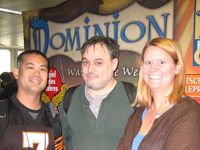 Dale Yu is a writer, board game designer, and critic. Together with Valerie Putman, he helped Donald X. Vaccarino to create and playtest Dominion and several of its expansions.

Dale has previously worked as designed and tester on a number of board game titles, which provided him with opportunities to be an early tester for upcoming games from various publishers. As Dominion was entering development in 2009, Rio Grande Games approached Valerie Putman with an opening to aid in development and testing work. In turn, Valerie enlisted Dale's help. Together they formed the developing partnership "They Might Be Developers", which has gone on to provide input on Dominion, and the Intrigue, Alchemy, Seaside, Prosperity and Cornucopia expansions.

A brief biography is linked here on Opinionated Gamers.