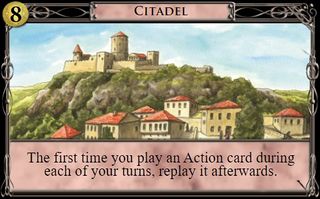 Initially I did two things with States: I had ones that one player could have, and ones that every player got a copy of. The ones that every player got could turn over; one side would have a rule that let you upgrade it. We liked these a lot. The other two-sided States, they were good times, but did not go well with the idea of a simpler expansion. Here, read this extra card, now turn it over. They turned into Projects: you pay to put a cube on a card, and now you have that ability. This is not only simpler - no second side to read, no text to explain how to upgrade it - it also means only one card per Project, rather than six (for six players) per two-sided State. So I could fit way more of them into the set, hooray.
—Donald X. Vaccarino, The Secret History of Dominion: Renaissance