Ducat is a Treasure card from Renaissance. Unlike most Treasures, Ducat gives Coffers instead of vanilla +

. It also is a +Buy card, and may trash a Copper

from your hand when gained.

Ducat can be seen as a variant of Candlestick Maker

cards in the early game. However, the buy it provides can be useful, especially because the +Buy does not cost an action. 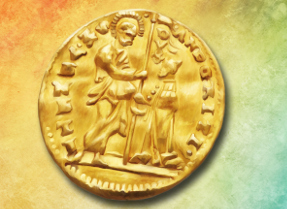 Ducat is the Coffers treasure. If you have a Copper

in hand when you get it, it essentially upgrades the Copper into a kind of save-able Copper.
—Donald X. Vaccarino, Renaissance Previews #3: Villain, Ducat, Silk Merchant

A late card. I needed a

, and a +1 Buy card. Matt suggested making it a Treasure and there it is. It didn't change, but it did get argued about. Adam felt like it was "strictly better" than Candlestick Maker

. I am pretty sure it isn't. What feels better is when you trash a Copper with it... which effectively costs you

. But any which way, one is a Treasure and one an Action, and various things make those categories matter. It and Candlestick Maker are more similar than most pairs of cards, and well, twelfth expansion, trying to have simple cards, no regrets.
—Donald X. Vaccarino, The Secret History of Dominion: Renaissance