Snowy Village is an Action card from Menagerie. It is a village that gives a large number of +Actions, but at the cost of preventing you from getting any more +Actions for the rest of the turn. 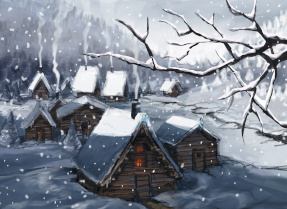 Snowy Village is based on an idea debuted in a parody Christmas Kingdom by Donald X. Vaccarino and head playtester LastFootnote. In the parody kingdom, Snowy Village only cost

Snowy Village gives you a bunch of actions and a buy, but closes the door on even more actions that turn. Some of you may remember this from the holiday joke cards that were on dominionstrategy a few years ago. I wouldn't be expecting those other cards, but this one was worth doing.
—Donald X. Vaccarino, Menagerie Previews 1: 5 Cards

This started life as a joke card, in a Christmas kingdom I made (with help from Matt). Hey that idea wasn't bad. I made it more exciting by giving it +4 Actions and +1 Buy. Eventually it dropped from