Sibyl is an Action-Augur card from Allies. It is a source of non-terminal draw that allows you to organize your deck a bit by putting cards of your choice at the top and bottom. It has similarities to Secret Passage

It is part of a split pile that it shares with the other Augurs: Herb Gatherer 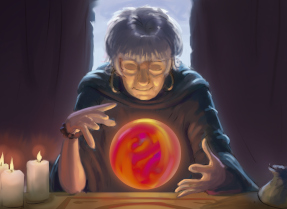 is a guessing game, and if you're right you Curse the other players. And Sibyl lets you win that guessing game.
—Donald X. Vaccarino, Allies Preview 2: Split piles

There was a big choose-two where Sibyl is, but it almost immediately became the final Sibyl.
—Donald X. Vaccarino, The Secret History of Dominion: Allies