Wine Merchant is an Action-Reserve card from Adventures. It is a +Buy card that gives quite a bit of

; as a penalty for this, it sits on your Tavern mat after playing it until you end a turn with

There is no strategy article for Wine Merchant, but the card has been discussed on the forum.

Wine Merchant is a terminal payload card, that gives a lot of virtual money and +Buy, but does so at a penalty: it stays on the Tavern Mat after you play it, and you need

leftover to get it back in your deck. This means that a single Wine Merchant is just a Woodcutter

if you discard it from the Tavern Mat the same turn you play it. Since Woodcutter is only a

card, and a weak one at that, you will need a way to make Wine Merchant more than just that if you decide to buy it. (An exception may be if you're very desperate for +Buy, like with Woodcutter itself and other weak cards such as Herbalist

There are two ways around Wine Merchant's drawback. The most obvious one is to use it for spiking a higher cost; this is very useful if there are strong

or more cards you want in this kingdom. You can play the Wine Merchant, buy that Prince

you really want, and use a later dud turn to get back the Wine Merchant from the Tavern Mat. This is possible, but it does give your Wine Merchants a higher chance of missing shuffles, so you might want to keep track of when a shuffle is about to happen.

The second and usually better way to use Wine Merchant is to use it in multiples. Wine Merchant's wording is such that you only need

leftover to discard ANY number of them from your Tavern Mat. So, assuming you want to discard them all on the same turn you play them, one Wine Merchant only gives you

, but two of them gives you

, and so on. This is most feasible in big engines: if you can draw your deck with multiple actions leftover, you can use those actions to play a bunch of Wine Merchants, and go double or even triple Province 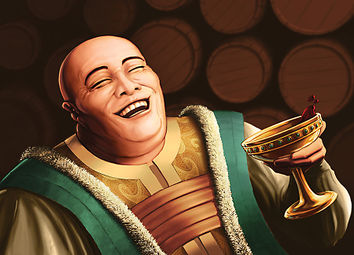 In the second edition reprint, the card's "+1 Buy" was mistakenly placed beneath its "+

Originally it didn't give +1 Buy. I tried letting you get it back for having any unspent money, but upped it to needing