Secret Chamber is an Action-Reaction card from the first edition of Intrigue. Its Reaction allows you to move cards between your hand and the top of your deck when an Attack is played, which might help defend against deck inspection attacks by allowing you to choose what card the Attack finds, or against handsize attacks by helping ensure that you have cards in hand that you want to discard. When played, it lets you discard cards for

Before it was removed, Secret Chamber was a very weak payload card that provided a discard for benefit effect similar to that of Storeroom

. While not frequently useful, it has two main use cases:

Secret Chamber’s Reaction is generally not a reason to gain the card, but if you have a copy in your starting hand anyway, the Reaction can provide a small reliability boost. It is also sometimes useful in a slog, particularly against the removed card Mountebank

, where it can help you find Curses

to defend against the attack. 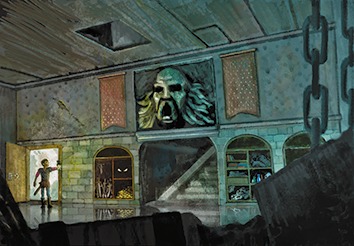 The set had a reaction early on, but had lost it by the time development started. Dale wanted another reaction, and the set had space, due to going up to 25 cards. I didn't want to just stop attacks flat-out again, so this card instead does something odd that's useful against lots of attacks. You'll have to consider the individual cases for yourself, but really, it does show a lot of attacks what for. The non-reaction part had been a card in the main set in the murky past, which had left due to being too weak. It seemed good enough here with the reaction tacked onto it, and cute because it helps vs. Curses, which the reaction part doesn't. As with the similar nixed card described in the Courtyard entry, this can cause some AP, but it's not as bad because the attack gives you some direction and it isn't your turn.
—Donald X. Vaccarino, The Secret History of the Intrigue Cards

have to be on the weak side, but I would probably still try to improve Secret Chamber. It also has the issue of making reactions confusing - the whole business of, reveal Secret Chamber, resolve it, reveal a Moat I drew off of it. It would be better to avoid that issue, even if it meant just not doing Secret Chamber's reaction.
—Donald X. Vaccarino, What Donald X. Might Do With a Dominion Time Machine

People don't cite this one anywhere near as often as Scout

, but I actually get it even less often. The reaction is confusing and rarely useful; the top part is a fine ability but very weak, it wants to come with more stuff.
—Donald X. Vaccarino, The Secret History of the Dominion 2nd Editions

The action part is on e.g. Vault

. The reaction has no replacement and well. It's mildly interesting, a different way to deal with certain attacks, but no star. I wouldn't hold out hope for a new one.
—Donald X. Vaccarino, Product Idea - Dominion: Memories