Banish is an Event from Menagerie

. It lets you Exile any number of cards with the same name from your hand.

Banish is an Exiling Event, functioning in some ways like a mass trasher, such as Chapel

, except with the advantages that exiled victory cards still score and, after thinning is done, no "dead" trashers are left in your deck.

cards will often result in a hand like Silver-Copper-Copper-Estate-Estate during the second pass through a deck. Banishing two Estates at that point will generally benefit a deck more than buying a cheap engine component.

Similarly, on the third pass through a deck, after playing a

The relative speed trade-offs between acquiring another engine component versus thinning a deck via Banish will often depend on what other cards are present. Non-terminal trash-for-benefit engine components, such as Raze 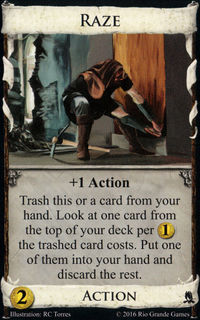 , may be preferable to using Banish and delaying component purchases.

Effective mass trashing, of course, benefits all types of decks, not just engines. Banish does have a disadvantage compared to other mass trashers when the cards to trash, such as Ruins or Shelters, have different names.

In the late game, while greening, Banish can exile multiple Provinces at once when drawing a hand with only

. Unless the game is about to end, this will generally help a deck more than buying an Estate. With

in hand, the decision to buy a Duchy versus Banish two Provinces is much tighter.

Without +Buy, though, Banish is mostly a tactical option useful just two or three times during a game. 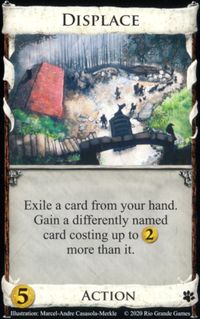 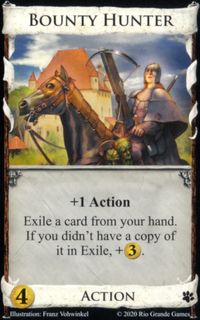 , which lend themselves more to one-province-a-turn "lean and mean" decks than engines that buy multiple Provinces at once.

With +Buy, Banish can keep a deck buying multiple Provinces from clogging during greening. This is particularly useful in Colony

games, to efficiently march through the Provinces before Colony engines can get going.

This is less important in Province games, as an engine that buys several Provinces typically "fires" only once or twice before the game ends.

However, Banish can be effective in Alt-VP games, where a smaller, faster engine with +Buy can purchase, say, multiple Duchies on one turn and then buy a Duke

while banishing several previous bought Duchies on the next to good effect. This approach can also work with Gardens

decks of Copper without harming their scoring.

An early Event, stayed just like this.
—Donald X. Vaccarino, The Secret History of Dominion: Menagerie