Gatekeeper is an Action-Duration-Attack card from Menagerie

. It forces other players to Exile any Action and Treasure cards they gain without already having a copy in Exile.

Gatekeeper is viewed as one of the weakest cards from Menagerie.

actions can be very powerful, and Gatekeeper's effect is often too slow and not effective enough to be worth the opportunity cost of buying a different

Action. It is strongest against cards that gain Actions of different names, such as Black Market

, or Prizes from Tournament 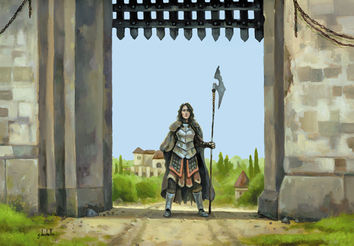 The premise remained constant. Some versions always exiled the card; you'd get back the previous one, so once you had e.g. Silver

would work, you would just technically put one Silver

into exile and discard the other one. I never liked that much, plus the card felt too oppressive, so it changed to just not working every other time. Some versions cost

, but man you don't want to be under this right away.
—Donald X. Vaccarino, The Secret History of Dominion: Menagerie

As a potentially really oppressive attack (and there were more oppressive playtest versions), the intention was for it to be at a below-average power level, but not so weak that you'd never play it. It's weaker than intended but also more rules-messy than I'd like. So it's not just a dud, I'd have liked to replace it anyway. Attacks are tricky. These days attacks try to skew weaker (though sometimes they're still strong). In the early days there were a bunch of strong attacks and the feedback I get is that, while some players love attacks, players in general do not enjoy e.g. discarding every turn to Militia