A gainer is any card which allows you to gain cards without buying them. The simplest example is Workshop

. They often work well with Gardens

strategies, as they allow you to gain more cards than you have buys. They can also be useful for picking up engine components, especially cheap ones.

Cards that allow you to trash one card and gain another, like Remodel

, are usually considered to be in a separate category from gainers, since they don't increase your deck size. However, they can sometimes have similar functions for gaining engine components or accelerating a three-pile ending.

These cards let you gain cards costing up to

. Many of them work well in combinations with cost reduction methods like Highway

, which will let you gain more expensive cards than you usually can.

[edit] Gainers with a cost limit other than 4 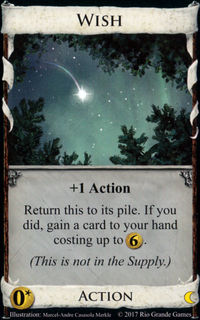 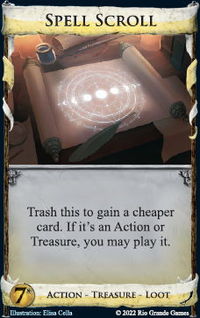 gain a card, but as one-shots act more as temporary replacements than gainers.

[edit] Gainers depending on cards played

These cards can gain with no cost restriction; what cards they can gain depends on whether or not copies of those cards are in play when the gainer is used, or played while the gainer is resolving. 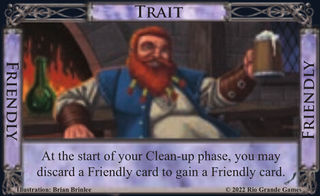 , from Plunder, resembles Way of the Rat, but lets you discard a card, rather than play it, to gain a copy. 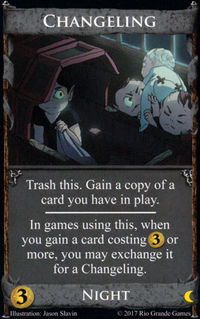 , from Nocturne, is another one-shot gainer; which can gain copies of cards in play.

These cards can gain cards out of the Trash instead of the supply:

technically gain cards from the trash as well, but only the cards trashed as part of resolving their Attack abilities.

These cards resemble the above in gaining cards up to or at a particular cost, but do so when you buy or gain another card, rather than when you play the gainer itself.

Certain cards allow you to gain only Treasures. Some of them gain only specific Treasures; others gain whatever Treasure happens to be available. Lists of Silver gainers and Gold gainers can be found at the articles for Silver

; other Treasure gainers are listed here:

For a list of Events that gain cards, see here