Hunting Grounds is an Action card from Dark Ages. It provides a large amount of terminal draw but is relatively expensive. When trashed, it gives you a free Duchy

Hunting Grounds is very efficient at converting terminal space into draw, and with a village available it can therefore provide a large amount of draw. Because it draws more cards per copy played than the majority of similar cards, fewer copies of Hunting Grounds are necessary to achieve the same total amount of draw compared to alternatives. However, because having fewer copies of your draw card increases the chance of bottomdecking a significant portion of them, it's usually best to acquire more copies than strictly necessary for the amount of draw you need. Although this eventual overdraw is often useful, Hunting Grounds’ high price can make it difficult to acquire early in the game, and difficult to ramp up your draw.

A variety of supporting effects can help mitigate some of these issues.

Because of its on-trash benefit and high price, Hunting Grounds is a good target for trash-for-benefit effects in the endgame, especially Remodel variants, since this allows you to add a substantial number of

. However, given that replacing a strong draw card with multiple stop cards has a highly detrimental effect on your deck control, this is usually only viable at the very end of the game, and it may be difficult even then, as you need to be able to draw without playing the Hunting Grounds that you want to trash.

and using them to trash Hunting Grounds from the Supply, you can very quickly rush down the Duchy

pile and subsequently the Estates

. As a result, the game generally ends very quickly with a pileout on Duchy

, Hunting Grounds, and either Lurker 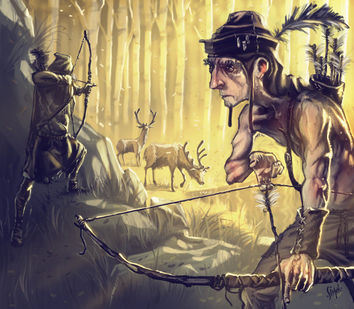 The bottom started out on a victory card worth 3

. It was a defense vs. Knights, and cute with Remodels, but not really so worth doing. So I dropped that card, then brought the bottom back with a simple action top. I see from my files that I briefly tried it at

with "+3 Cards +1 Buy" before going to the +4 Cards version.
—Donald X. Vaccarino, The Secret History of the Dark Ages Cards