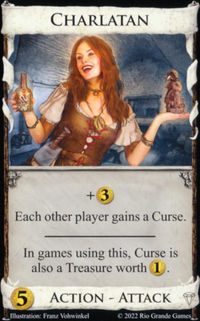 is an Action-Attack card from the second edition of Prosperity. It is a cursing attack with a twist: its presence somewhat mitigates the badness of Curses

by turning them into Treasures similar to Copper

. You still don't want a ton of Copper-like junk in your deck, and the Curses are still worth negative

, but at least now they're not totally dead cards. 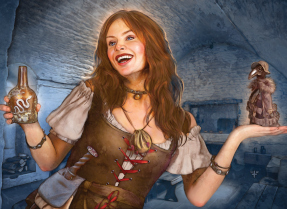 is easily one of the most miserable powerful attacks in the game. It fits the theme of Ghost Ship

: you get so much junk that you don't get to see your deck. It's the card I most wanted to replace in Prosperity.

and Treasures that make

, but makes them the same card, which is way more manageable. There are a lot of cool interactions that come up as a result.
—Donald X. Vaccarino, Prosperity 2E Preview 1

Several times over the years, I've tried and abandoned attacks that give out Copper

, but you know, not every time you play them). They vary a lot based on the number of players and thus size of the Copper

pile, which turns out to be a problem. I tried another one here, man, still didn't work, go figure. But wait, I could set the size of the Copper

pile, by making it the Curse

pile. And thus, Charlatan. It's sometimes very fun that the Curse