Border Village is an Action card from Hinterlands. Its on-play effect is identical to Village

, but Border Village's key property is that when you gain it, it comes with a free card costing up to

. The effect of buying Border Village for

is thus equivalent to buying a

Action and getting an additional village.

Border Village is a simple village, equivalent in its on-play effect to Village

itself, with a strong on-gain effect that allows you to gain a cheaper card along with it. While it is very expensive for a village, effectively paying

for a strong Action card costing

in order to get a village thrown in with it is often a very good deal and allows you to build an effective engine more quickly than usual. This is especially true because these desirable cards (most frequently draw, Attacks, or payload) are often terminal and you would therefore need to expand your terminal space in order to play them in any case; examples include Council Room

. Because this option is even more expensive than

, it's unlikely to be a viable way of gaining all your terminals, so you may sometimes need a few copies of a cheaper village (if available) in addition to your Border Villages. Additionally, if the Kingdom lacks strong terminals at

and +Buy is not a limiting factor, cheaper villages will sometimes offer better overall value than Border Village.

If you are not reliant on keeping all your copies of Border Village for terminal space, it is an excellent target for trash for benefit effects like that of Salvager

, since its price greatly exceeds its value once it's in your deck. This can be especially relevant if strong, cheaper villages are also easy to gain (e.g. with a Workshop variant) or if the Kingdom offers useful non-terminal cards costing

in the endgame, before that you can also turn some appropriately-priced card (sometimes Border Village itself) into a new Border Village, gaining another card with it; this effectively transforms a card like Transmogrify

into a net gainer. In the endgame, the fact that each Border Village gain comes with an additional gain often makes a pile-out available sooner than it otherwise would be; this sometimes involves using the extra gain to score 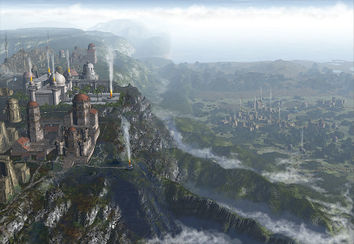 Villages got +2 Actions because they are groups of people, doing things for you. A Border Village is nice for the faraway places theme. Being on the border, you have better access to certain goods.
—Donald X. Vaccarino, The Secret History of the Hinterlands Cards

So what can a card do when you gain it? Some things are not so appropriate for that particular window of time, but many things are. One of the basic things is, gain another card. Border Village is an example of that; it comes with something else. Something cheaper, so lowering the cost won't let you just pick up the pile. Village

, but paying an extra

when you buy a

to get a Village with it is often attractive. Once in your deck, Border Village is a

value, but has a

in the corner. It's a great card to trade in for something better, via Remodel

From when Hinterlands was first its own set. Originally it cost

. I made it better by charging more. There's a trick you can't usually do.
—Donald X. Vaccarino, The Secret History of the Hinterlands Cards

There was a victory card for

, that came with a Duchy

card you got two of, but that pile runs out twice as fast, which I preferred it not doing. This card was cute but space was limited, and it stopped seeming as necessary when Border Village switched to costing

.
—Donald X. Vaccarino, The Secret History of the Hinterlands Cards