Candlestick Maker is an Action card from Guilds. It provides Coffers and non-terminal +buy.

Candlestick Maker is a weak non-terminal source of Coffers and +Buy. As a stop card that provides only a small amount of payload, roughly equivalent to a Copper

, its ability to provide +Buy is usually its most important feature. Although +Buy is an important addition to most engines, many other sources of it are overall stronger cards, often because they also provide draw (e.g. Barge

). Candlestick Maker’s main advantages are that it is cheap and non-terminal, and therefore relatively easy to add to your deck in the midgame. Gaining one the shuffle before you expect to generate enough

to effectively use the +Buy is usually best.

As a source of payload, Candlestick Maker is marginally better than Copper

. Its Coffers do provide a useful increase in flexibility: even in small quantities, these can have a significant effect on your ability to hit price points, for example by potentially letting you spike a large amount of

. However, because both Coffers and additional Buys have diminishing returns, you usually won’t want more than one or two copies. Candlestick Maker does offer synergies that Copper

doesn’t, most often when you specifically need Action-based payload. Some examples include decks using draw-to-X effects or Scrying Pool 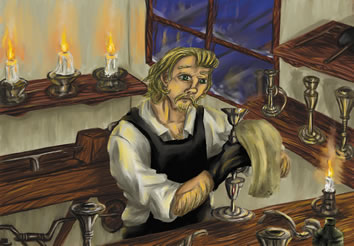 If you look closely at the art, you'll notice the man depicted is making the candelabra featured on Masterpiece

For Alchemy I wanted a single

." Some people preferred this to Herbalist, but some people felt like, hey what does this have to do with Potions. And I could make that card later. So I put Herbalist

in Alchemy. I next tried the card out in Hinterlands, with "when you gain this, +1 Buy." As recounted in that secret history, some people thought it was hilarious that two Highways

let you just buy out the pile, but some people abhorred it. I couldn't tell you why, I thought it was hilarious. But the card was just not sufficiently hilarious to live with the hate. I bumped the card out again. Then it seemed like a great fit for Guilds, where the +

could become a more exciting "take a Coin token." And here it is.
—Donald X. Vaccarino, The Secret History of the Guild Cards