Council Room is an Action card from the Base set. It is a terminal draw card, meaning it provides +Cards but no +Action. It also provides non-Attack interaction between players: the benefit to you is counterbalanced by a benefit to your opponent, making them draw a card.

Council Room is a draw card similar to Smithy

, but giving all players an extra card. Its +Buy offers some flexibility in building.

With a village, Council Room makes for strong deck-drawing engines. Compared to a Village

There are two main problems with engines that only use Council Room as draw:

However, if your opponents are also playing Council Rooms, chances are you will start your turn with more than 5 cards in hand.

Engines become more reliable when using Council Room as a supplement to other draw cards, for example Laboratory. In this case, duds are less likely, and your opponent is drawing fewer cards on your turn.

You can mitigate the drawback of Council Room by playing with a handsize attack, such as Militia

. No matter how many Council Rooms you play, they'll still have to discard down to a 3 card hand. This does allow them to sift through bad cards and approach a reshuffle sooner, though, so the card draw is not completely counteracted.

Council Room is also a strong Big Money enabler in the Base set: this strategy involves opening with two Silvers

, then only buying Treasure cards and 1–2 Council Rooms before greening. Although powerful for newcomers to Dominion, this does not reach the full potential of Council Room. 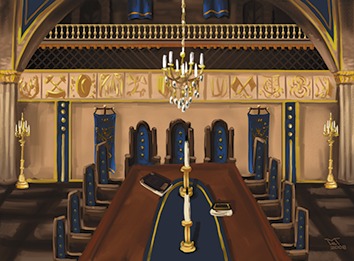 Originally the 4th expansion had a "non-attack player interaction" sub-theme. It was easily the best expansion, and it became clear that I should split that sucker up. The main set got this card.
—Donald X. Vaccarino, The Secret History of the Dominion Cards

For a bit there Council Room cost

, because no-one would buy it at

I don't like Council Room, I considered giving it the axe in 2E. I don't like those BM council room decks that make new players think building engines is for chumps...The friendly interaction is not the best, some players won't touch it because it gives someone else a card. Mainly what you get out of it is the joy of the Militia

somehow does much better here, people are hesitant but really want their Lost Cities