Junk Dealer is an Action card from Dark Ages. It is a cantrip which gives +

, but also requires you to trash a card; this is a benefit for most of the game, but can become a liability later.

Junk Dealer is a strong trasher and Peddler variant. Unlike most Peddler variants, Junk Dealer reduces your overall hand size rather than maintaining it, as it is mandatory to trash a card. However, its cantrip nature does mean that, unlike many other trashers, Junk Dealer taxes neither your draw nor your terminal space and offers useful cycling. Additionally, it also has the advantage of making it relatively easy to generate

; even if you use it to trash a Copper

, it's likely that you'll draw another in addition to the

cards. If you are using Junk Dealer as your primary means of thinning, adding a second copy can be helpful as well, particularly if you are facing a junking attack. Alternatively, Junk Dealer can also function well alongside other (likely terminal) trashers such as Moneylender

. As a mandatory trasher, Junk Dealer loses some of its value once your deck starts to become largely clear of junk. If you lack good deck control, it sometimes becomes risky to play it: if you have no desirable target in hand, the card it draws does provide an extra chance of finding one, but this is only likely to be a reasonable gamble if that chance is fairly high given the remaining contents of your deck. However, Junk Dealer may remain useful in the later game if there is a continued influx of junk into your deck, either from junking attacks or because you are deliberately gaining it, such as with Groundskeeper 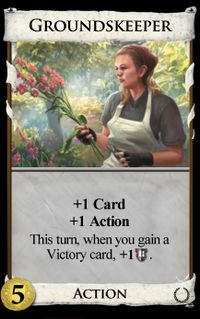 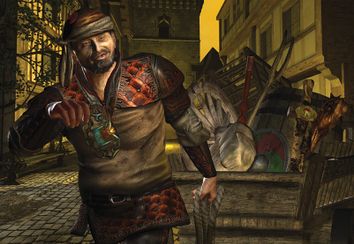 This was a relatively late addition. I wanted another +1 Card +1 Action thing for

. I tried a version of this that only gave you the +