Shanty Town is an Action card from Intrigue. It is a village—i.e., it gives +2 Actions—that draws cards only if you have no other Action cards in hand.

Shanty Town is a weak village, often equivalent to Necropolis

in its effect. If you can activate its draw effect by playing it without Action cards in hand, it is equivalent to Lost City

, but this is usually very difficult or impossible to do consistently in an engine. Shanty Town has two fundamental problems:

As such, in many cases Shanty Town compares poorly to other villages that consistently maintain your hand size (like Village

) or more reliably offer a helpful bonus (like Squire

). If you need extra terminal space and there is no alternative, Shanty Town can fulfill that purpose even though it may often not draw any cards.

Shanty Town is stronger when you can play it without any other Action cards in hand. This is likely to occur in several cases. 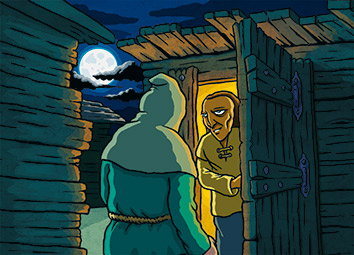 I took this from the ruins of the 7th expansion. The 7th expansion didn't have a strong mechanical theme to make me leave its cards alone. It had a theme, but you know, just not the kind of thing that meant there was a pile of cards that had to wait in order to do the theme all at once. Plus it had a lot of good cards and well there were earlier expansions that wanted them. So it lost card after card, until eventually it dissolved completely; the theme itself was taken as a sub-theme for another expansion. This particular card made it here because I wanted another Village and this was a cool one.
—Donald X. Vaccarino, The Secret History of the Intrigue Cards

Those of you noting that Dark Ages is the 7th expansion, and that in the Secret History for Dominion I say that Adventurer

came from the 7th expansion: that 7th expansion was the top-of-deck one. Ditto for Shanty Town.
—Donald X. Vaccarino, The Secret History of the Dark Ages Cards

When it's not a bad Village (which is still a Village so there's that), it can be a tricky Lab