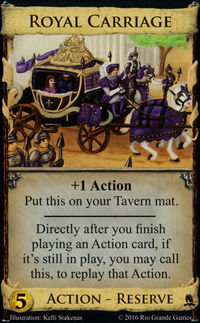 is a fast combo that takes advantage of Royal Carriage's Reserve nature to stockpile a bunch of them, calling them all on a single Bridge in one turn to buy out the Provinces

This combo is similar to Native Village and Bridge; the goal is to end the game with a megaturn where you play and replay Bridge several times to buy out the remaining Provinces (and perhaps some Duchies

in hand. If some Provinces are gone, you can also end the game with 5 Royal Carriages in reserve, a Bridge and sufficient coin in hand (

This strategy is moderately affected by attacks. Ghost Ship

is the most debilitating; it makes it harder to reach 5 coins to buy Royal Carriage, and it reduces the speed at which you can play and use Royal Carriages. Other handsize attacks are an inconvenience; invest in more Silver

. Junking attacks slow this combo down a little; sifting becomes extraordinarily valuable. Trashing attacks can hurt if they hit Royal Carriage; buy more copies than you need and keep them on your Tavern mat longer.