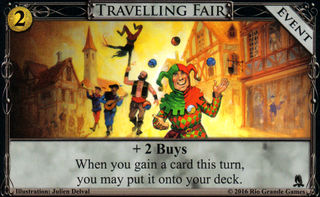 is a combo that uses Travelling Fair's +Buy and top-decking to fuel Counting House to quickly buy out the Provinces.

Counting House is usually regarded as one of the weakest cards for its cost; while it can provide a substantial amount of

, it's reliant on how close to a reshuffle it's drawn, and its buying power can be undercut if there's no +Buy to use it. Travelling Fair addresses both of these problems: once you're fielding enough

, it can top-deck a newly bought Counting House, as well as 4 Coppers

Ignore all other Treasures. Buy Travelling Fair at every chance, and as many as you can, and just flood your deck with as many Coppers as you can buy.

After a few turns, you're pretty much guaranteed a hand of 5 Coppers. Buy a Counting House.

Once you draw the Counting House, you're more than likely to get at least 7 Coppers in hand. Buy as many Travelling Fairs as you can (up to 4) until you have

Since every turn you're just increasing your purchasing power by

, you can keep making that same buy (4 Travelling Fairs, 4 Coppers, 1 Counting House) over and over again.

After a couple turns, once you make your obligatory 4-TF/1-CH buys, you'll have

or more left over. Start using a Buy on a Province instead of a 4th Copper. After a couple more turns, you should be buying multiple Provinces every turn. In a solitaire game, you should be able to clean out the Provinces in around 12 turns.

This is highly vulnerable to Attacks, particularly Pillage

, which can discard your Counting House, Cutpurse

, which can stymie your first Counting House Buy, and Minion

and any deck inspection attack or deck order attack, which can force a reshuffle. Possession

can also mess with this combo, but getting a Possession quickly enough will be rather difficult. However, this strategy is a bit more resistant to junkers, especially after you have your first Counting House, since you won't be shuffling anyway, as well as most handsize attacks, since you can just discard Coppers. This combo is also slightly dependent on shuffle luck: if you can't manage to produce

by your third reshuffle, it will take about 4 extra turns to empty out the Provinces.