Counting House is an Action card from Prosperity. It allows you to pull all Coppers 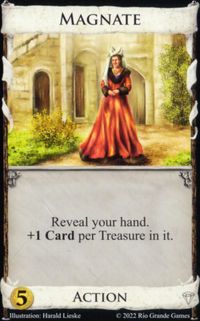 which generally synergizes with having many Treasures, not just Coppers

Before it was removed, Counting House featured in a few combos, but otherwise was very rarely playable. The core problem with Counting House is that it can only make a large impact in decks that have many Coppers, but these decks tend to be weak and unreliable. It also has a large opportunity cost since it is terminal and costs

, and it does nothing when your discard pile is empty, either at the top of a shuffle or after you’ve drawn your deck.

are in the discard pile every turn, and the Travelling Fair combo in particular is extremely powerful.

Other use cases are very rare:

Donald X. and his playtesters nicknamed this card "Counting Horse".

The name is a reference to the nursery rhyme, Sing a Song of Sixpence. 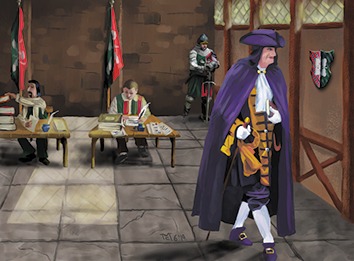 The art shows the

came up with this card. Her version got you back all of the Silver

, which was crazy. Women! The Copper

s version worked out, and just left getting a good wording.
—Donald X. Vaccarino, The Other Secret History of the Prosperity Cards

Counting House is narrow but a set can have a narrow card, some people love winning with narrow cards in the games where they are good enough. I just beat FTL's turn-two Mountebank

with it so there you go.
—Donald X. Vaccarino, What Donald X. Might Do With a Dominion Time Machine