, Fool's Gold gets progressively more powerful the more of them are played together.

Fool’s Gold is a cheap, dense payload card that is entirely reliant on colliding with copies of itself. As such, Fool’s Gold is most usable in Kingdoms with thinners, which can remove your starting cards and increase your odds of such collisions. Fool’s Gold is also good with sources of +Buy, both to get multiple copies of Fool’s Gold at once and to effectively utilize the potentially large amount of

generated. Draw also works well with Fool’s Gold, as every additional stop card supported can be another

generated. Fool's Gold is less likely to be impactful in Kingdoms lacking one or more of these effects.

Cards that provide multiple of the effects above synergize well with Fool’s Gold. Forager

all provide early thinning and +Buy so that you can start buying and colliding Fool’s Golds. On an early

) can similarly be useful to both encourage collisions and quickly add more Fool’s Golds. Terminal draw cards with +Buy, such as Barge

, also work nicely with Fool’s Gold, but will often appreciate other sources of thinning.

In Kingdoms with the right support, Fool’s Gold can be a very effective source of payload. Because of its cheap cost, with each additional copy generating

, it’s easy to add to your deck and an effective way to rapidly increase your economic output. Additionally, with sufficient copies, it generates more

per stop card than does Gold

; three copies of Fool’s Gold generates the same amount of

per card, and so on. Fool’s Gold is best added to your deck after you’ve begun working on your deck control, as if you can’t reliably line them up adding a Fool’s Gold is similar to buying a Copper

Even in Kingdoms with the right support, Fool’s Gold still has some of the typical problems of Treasure-based payload. Most importantly, it’s a stop card that can cause even a strong engine to dud with unlucky shuffles. Second, because its use is restricted to the Buy phase, you cannot set up gain and play situations as you can with other strong payload cards such as Altar

, and it anti-synergizes with Throne Room variants and draw to X.

Fool’s Gold’s Reaction is rarely worth using, as doing so likely reduces your

the turn after. In most cases, Reacting for a Gold

is likely going to cause you to generate less

than if you just keep the Fool’s Gold. Also, adding a stop card to the top of your deck is likely to cause an engine to dud. 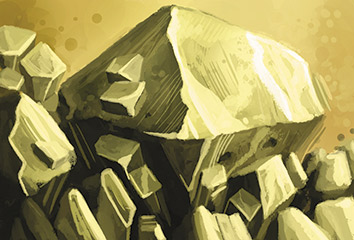 This name was on different cards at different points; it was a useful name. The original Fool's Gold was the action version of Diadem 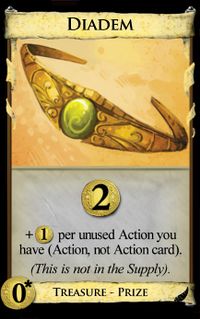 . This card was hard to name and this name seemed to fit, so here it is. It varies in value, and when people get desperate towards the end, they don't look as closely at your money.
—Donald X. Vaccarino, The Secret History of the Hinterlands Cards

Fool's Gold meanwhile is the kind of card you might want two of on turn two. A Fool's Gold-based economy can rake in the cash, provided you can get rid of your Coppers

and/or draw extra cards. One is only worth

, but two together are

. Other quantities are left as an exercise for the reader. Fool's Gold can also turn into Gold

in the late game. You may not even want to do this when you're going all-out for Fool's Golds, but some games you just picked one up randomly when you had

, or you got some to stop other players from getting all of them, or you got some and then realized, wait a minute, I do not have what I need to make this work. And then you wait patiently for someone to buy a Province

, and cash in. The Gold you gain goes right on your deck, so you even have a chance to draw it before the game's over.
—Donald X. Vaccarino, Hinterlands Previews #2

The top started out as worth

per copy you had, on a version of Ill-Gotten Gains

. It needed a tortured wording to have it be that if you played three you got

for each, since you play them one at a time. Bill Barksdale suggested having it be

, which was much simpler. It's stronger when you have just two, and weaker when you have more than three, but that all worked out. Meanwhile the bottom started on a card in a later set, and bopped around a little before ending up here. At one point the Gold

didn't go on top of your deck, but it's so late, it has to go there.
—Donald X. Vaccarino, The Secret History of the Hinterlands Cards