; but it forces you to trash either another Action card or itself to get the

. It also comes with two Ruins, which conveniently make for good Actions to trash, if you can draw them with the Death Cart.

Death Cart is a weak terminal payload card. While it generates a large amount of

, it also comes with two Ruins on gain, adding a total of three stop cards to your deck and putting a significant strain on your deck control. In addition, because the sustainable use of it requires terminal space, fodder (likely starting with the Ruins it came with), collision with said fodder, and the sacrifice of two cards' worth of hand size, other sources of payload are often easier to use and more reliable in the long run, and Death Cart is skippable in many Kingdoms.

Death Cart does, however, have three use cases:

Although it's rare for this to be an important consideration, the presence of Death Cart does make it very likely that +Buy is available in the form of Ruined Market

is visible (and crucial as the only source of +Buy), obtaining a Death Cart may be a decent way to add it to your deck. However, if it is not visible, it is very rarely a good idea to go looking for it, as gaining a Death Cart in that case is just as likely to leave Ruined Market

exposed, allowing your opponent to gain it, as it is to gain you a Ruined Market 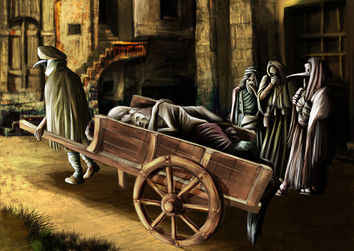 [T]he change is to stop you from e.g. Band of Misfits 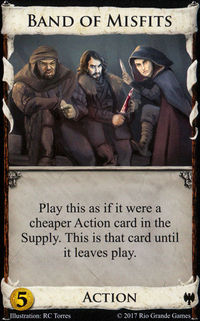