Beggar is an Action-Reaction card from Dark Ages. When played as an Action, it gains three Coppers

, putting them in your hand, so you get an effective +

this turn at the cost of gaining three Coppers. When revealed and discarded as a Reaction, it gains you two Silvers

, putting one on top of your deck.

Beggar is a very weak card that is rarely relevant, mostly because adding three Coppers

to your deck is antithetical to getting good deck control, and also generally decreases your money density. Beggar is a powerful enabler of a few very specific combos:

Very uncommon (but possible) use cases for Beggar include:

It is almost never worth it to gain Beggar for its defensive Reaction. Adding a Silver

to the top of your deck slows down your cycling. Even against Attacks such as Knights

that attack the top of your deck, adding an otherwise junk card in Beggar to your deck and reducing your usable hand size by one to stop a single Knight attack is usually not worth it. 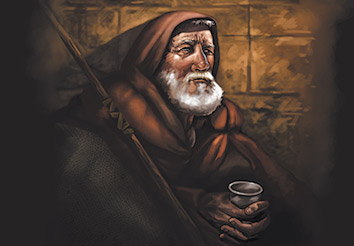 , and it wasn't good enough, but it seemed like a reaction might prop it up sufficiently. Then it got "+

" for good measure. And well the card was fine, if not exciting. Then I decided to change Squire

, as told in its story, and it took the cheap Silver-gaining, leaving me to replace the top here. Three Coppers seemed flavorful and interesting.
—Donald X. Vaccarino, The Secret History of the Dark Ages Cards