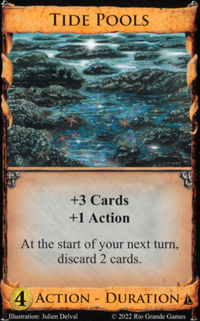 is an Action-Duration card from the second edition of Seaside. It provides large non-terminal draw when you play it at the expense of a reduced handsize on your next turn. 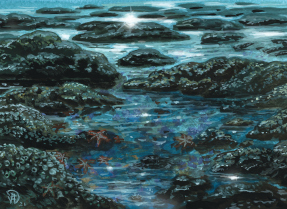 is fine to play if nothing else is claiming your action play, if you can just put this in instead of a Silver

and never notice that action cost. And if not then you don't touch it.

Tide Pools has nothing to do with Navigator; it's just some cool new card. Seaside had a few things that pushed bigger or smaller turns, so Tide Pools pursues that angle, making one turn bigger and another smaller, in the reverse order that Tactician

I was looking at what set sub-themes I could pursue, besides the "top of deck" thing, which had all but vanished. Some cards lead towards having big turns and small turns. So, a new one of those. It's a Tactician

where the good part is this turn, the bad part next turn. Briefly it cost