Sir Michael is one of the ten Knight cards from Dark Ages. Like the other Knights, he is an Action–Attack–Knight that trashes other players' cards. He is also a discard attack, forcing other players to discard down to 3 cards in hand.

page. The points specific to Sir Michael are reproduced below.

For overall Knight strategy, refer to the Knights strategy section. Sir Michael's discard attack is fairly strong, and is most useful in the midgame when players are likely to have less junk to discard but don't yet have reliable deck control. 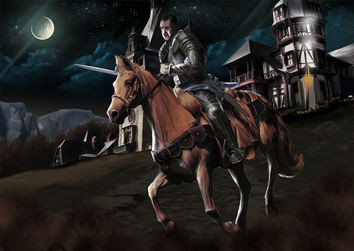 Sir Michael is named after Donald X. Vaccarino's e-friend and playtester, and the art was intended to depict him.