Horse Traders is an Action–Reaction card from Cornucopia. Played as an Action, it gives you

and a Buy at the cost of discarding two cards; as a Reaction, it defends against handsize attacks by setting itself aside and drawing an extra card at the start of your next turn.

Horse Traders is a weak terminal payload stop card. Its first main problem is that it is inefficient payload which compares poorly to terminal Silvers, as it pushes you towards a money density of

per stop card. Its second main problem is that it effectively costs cards in your hand. This increases the amount of draw you need for overdraw, and if you do not have weak cards (e.g. Estate

) to discard, could actively hurt your economy. Horse Traders does, however, have two main use cases.

Horse Traders’ Reaction to your opponents’ Attacks is usually not reason enough to get Horse Traders because it is unreliable and a relatively small payoff, but is a good bonus if you have the Horse Traders anyway. The Reaction is somewhat more useful against discard attacks because it can restore your hand size to counteract the Attack's effect.

Rarely, in a deck without Treasures or by playing it after those using Capitalism

, you can play Horse Traders with no other cards in hand and still get the full payload. While this isn’t strong enough to be worth actively pursuing, it may be worthwhile as a tactical play. 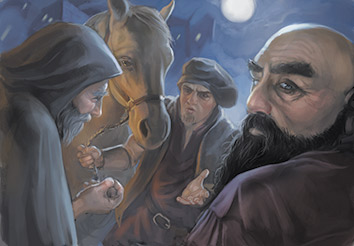 Seaside originally had a reaction that drew you a card when attacked. It died because it needed a messy phrasing to stop you from drawing your deck with it on one attack, after reactions changed to staying in your hand. But I had big plans to one day revive it with that messy phrasing.


I first tried it out in this set on a Village. I changed it to the money/discard thing in order to better fit the expansion theme. When I changed the theme I still liked the card so I kept it.

per 2 cards in your hand (no discarding), fitting the dead theme even better. That was too scary with card-drawing combos and lackluster without them.


There was significant debate over whether or not it should be cumulative - should it work against multiple attacks per round. For me there was no question. Originally it was cumulative. There would be games where somebody just randomly bought lots of attacks anyway, and the person with the most Horse Traders won. It's plenty of bonus without being cumulative.
—Donald X. Vaccarino, The Secret History of the Cornucopia Cards