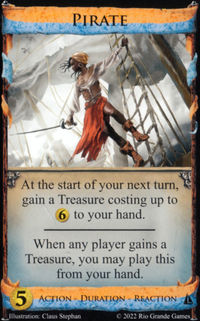 is an Action-Duration-Reaction card from the second edition of Seaside. It is a Treasure gainer that allows you to play it for free when any player gains a Treasure. 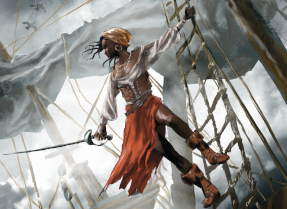 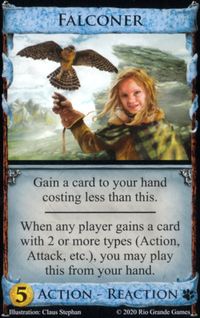 are the most expensive Reaction cards released to date.

is fine. It's been complained about a lot over the years, but well, it's really not so bad. But it was borderline, it was a contender for going, and then I wanted to add Pirate, which is similar. So, out with Explorer.

next turn, or maybe some other Treasure, and maybe faster than it looks.
—Donald X. Vaccarino, Seaside 2E Preview 3

[… T]he first version had no reaction. It had two complaints: was it really good enough, and also, doesn't this set have Explorer

? The second complaint was solved by replacing Explorer. For the first, it got a Reaction, triggering on a Gold

being played. Another card in the set triggered on Treasures being gained, and it seemed simpler to have the Reactions match, and the other Reaction was better. Then the other card left.
—Donald X. Vaccarino, The Secret History of Seaside 2E

We tried Pirate gaining any treasure; man, we tried it. Pirate is totally playable, and cards like that do not possibly want to be stronger than it is.
—Donald X. Vaccarino, Dominion Discord, 2022