Caravan Guard is an Action-Duration-Reaction card from Adventures. It is a delayed Peddler variant, but its

-producing can be sped up by letting you play it when another player plays an Attack.

There is no strategy article for Caravan Guard, but it has been discussed on the forum.

Caravan Guard is generally viewed as a weak card. When there are no attacks, it is a delayed Peddler

- but with a card like Peddler, you really want the money now, not next turn. It is worth picking up in cases where you would really like to buy something, but there are no other cheap cantrips that won't hurt your deck in some way or another. In many types of engines, you'd rather have a weak cantrip than a Silver, for example. In that vein, it's similar to cards like Pearl Diver

. Like all of these cards, Caravan Guard is most useful when you just want to have a bunch of Actions in your deck, for example if you want to play Conspirator

chains, or you have a Golem

Caravan Guard loses its delay when you are attacked during your opponent's turn, in which case it just becomes a Peddler. Against most attacks, though, it's not exactly the greatest defense ever - you'd rather not get a Curse

than be able to play your Caravan Guard as a Peddler. One exception is handsize attacks like Militia

; since you get the Caravan Guard(s) in play before you have to discard, you can mitigate the negative effects of the attack. It can also trigger a reshuffle, which is useful if you have dead cards in your hand when hit by a handsize attack. That way, the dead cards miss the reshuffle.

Another little trick is playing Caravan Guard against non-offensive attacks. If your opponent plays Minion

for the coins, technically they still played an Attack, so you're allowed to drop any Caravan Guards you have on the table. Other examples include Giant

when your opponent's Journey token is facing the wrong way, Haunted Woods

when you don't have any dead cards, or Swamp Hag

when you're not planning on buying anything (because maybe you want to gain cards another way instead, or buy an Event).

Caravan Guard was the first card released that can be played when it isn't your turn; Menagerie 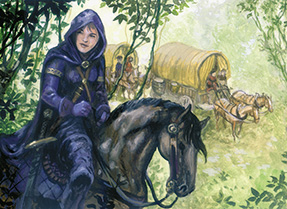 This came out of looking specifically to see if I'd missed some corner of possibilities for Durations. This is a Duration that's a round faster if you get attacked. The phrasing was an issue; what if you play it on someone else's turn and have a +

Caravan Guard hasn't gone over as well as I would have liked so far, but I'm still a fan. It's a little lackluster sans attacks, though I still get it some. Against attacks, man, gimme my

When you're being attacked a lot, it's a Peddler

, except you get a turn delay if you draw it mid-turn. When you aren't, okay, it's a delayed Peddler

and I mean you can buy it over Silver

and feel like it's always doing something. I dunno other people are more down on this than I am, but obv. it's way better when they're attacking you.
—Donald X. Vaccarino, $3 Cost Card Rankings Bottom Half