Bandit Camp is an Action card from Dark Ages. It is a village that gains you a Spoils

Bandit Camp is both a village and a Spoils

In money strategies, it can be useful early on as essentially a delayed Gold

, since every shuffle after the first time you see your Bandit Camp, your deck will both gain and use one Spoils

In engines, it is primarily used as a village, but it tends to delay achieving deck control by adding a temporary stop card to your deck. For this reason, if there are other villages, you are likely to want to get them first and get Bandit Camps later once your deck is more under control. Later, however, it becomes a great way to add both a village and additional payload to your deck simultaneously. In a deck that draws itself, the Spoils

that is particularly likely to be found near the end of your turn (since it is gained to the discard pile), so it is less likely than a Gold

to interfere with your ability to find all your draw cards. Bandit Camp works particularly well with cards that synergize with Spoils 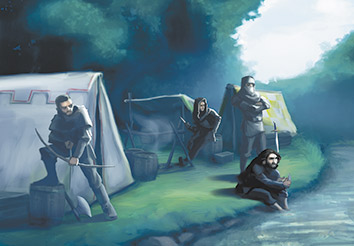 I started out trying '+1 card, +1 action, gain a Silver.' It was a very basic card I hadn't done yet. It was kind of weak. I tried it with the Fool's Gold

reaction on the bottom. Then the set needed another village, so I changed it to '+1 card, +2 actions, gain a Silver.' At that point people would complain that gaining Silver was at cross-purposes to having a village - the Silver reduces your chance of drawing your actions together. I thought it was fine though; some people won't see that, and if you are a more serious player who does see that, well, does it stop you from buying the card? I think not. And anyway some of the cards have to be simple.