Scrap is an Action card from Menagerie

. It is a trash for benefit card that gives up to 6 different bonuses depending on the cost of the trashed card. It is one of several ways to gain Horses

Scrap is a good opening buy and a flexible Estate

trasher that maintains some lesser value after the Estates

are gone. Since trashing an Estate

with Scrap grants a choice of two out of six possible benefits, Scrap offers a high degree of flexibility. For instance, if it is very important to hit

to buy a key card, you can choose the options to draw a card and generate +

, providing a good chance of doing so. Furthermore, it is fine to open with Scrap along with some other terminal Action, because if they collide you can choose the +1 Action option, allowing you to play both of your Actions. Finally, if you draw Scrap in a hand that does not need an immediate benefit you can choose to gain a Silver

, which can help your deck on future shuffles.

Once all of your Estates

have been trashed, Scrap becomes less valuable, but can still do some useful things. First, Scrap is capable of trashing other junk such as Coppers

. However, since these cards cost

, Scrap will not offer any additional benefits when being used this way. This means that Scrap is a weak way to accomplish this type of trashing, so often you would prefer to do it with a different trasher or even to forgo trashing your Coppers

altogether. Scrap can also be used to derive benefit from cards in your deck that are not as useful anymore, such as excess Silvers or a Moneylender

after all of your Coppers

have already been trashed. Finally, an important aspect of Scrap is that it can serve as a source of +Buy. Furthermore, since it can also gain a Silver

when trashing, Scrap can allow you to increase the size of your deck in a way that other trashers with +Buy options (e.g. Trade Route

) cannot, and you’ll often end up using the Silvers

from Scrap to generate +Buy sustainably. Typically, Scrap is a relatively weak and awkward source of +Buy, but sometimes there are no other options and you will already have a Scrap in your deck anyway from trashing your Estates

-based trash for benefit cards that are primarily used in the early game, Scrap is less valuable in Kingdoms with Shelters, as Scrapping one will only give one option rather than two, a massive reduction in Scrap’s utility. 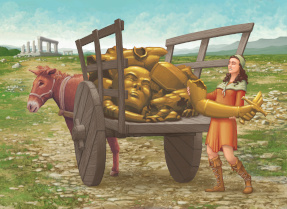 Scrap gives you a choice of bonuses, with more stuff for trashing a more expensive card. You could for example trash an Estate

This was a very old idea I just never got around to trying before. At first it cost

Why is the wording different from Courtier and Pawn?

I don't know if there was a reason; it sure looks like Courtier

's text would fit. It got this wording and this wording seemed fine; the usual story when people want the story of the wording.
—Donald X. Vaccarino, Menagerie Previews #2: Horses