cards on top of an opponent's deck. 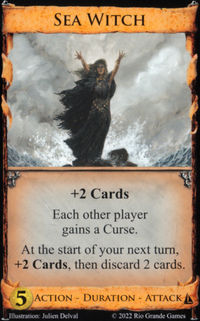 which is also a curser but ties into the set's Duration theme and offers benefits besides the attack.

Before it was removed, Sea Hag was a junking attack of varying impact. Unlike other cursers, Sea Hag offers no benefit beyond the attack, and therefore its strength rests entirely on how important that attack is in a particular Kingdom. Cursing

your opponents is generally a powerful effect (especially early in the game), so Sea Hag can be an essential card; however, it’s unlikely to be useful if the Kingdom offers reasonably strong trashing or a better junking attack, such as Witch

. When the Kingdom encourages you towards Sea Hag, gaining one early is usually a good plan.

Sea Hag’s main downside is that it takes up terminal space while doing nothing to help you either control your own deck or increase its payload; this also means it eventually becomes useless after the Curses

, although their impact occurs sooner than usual since they’re deposited onto the top of your opponents' decks. It's possible to cause serious damage in this way: early in the game, drawing the Curse

instead of a Copper

may hurt an opponent's purchasing power substantially, and later on there are situations in which it might be enough to prevent them from drawing their deck (e.g. if they have a weak or unreliable engine). However, occasionally the topdecking simply makes it easier for an opponent to deal with the Curse

before it can contaminate their next shuffle, for instance if their trasher is Lookout

, which benefits from the certainty that its target is on top of the deck. There are a few situations (e.g. with Chariot Race

) in which the ability to manipulate the top card of an opponent's deck could be useful for other reasons.

Beyond its use in Kingdoms which lack Curse

-trashing, Sea Hag might occasionally pay off in a situation in which you believe you're ahead of your opponents, and therefore you can afford the opportunity costs of Sea Hag more readily than they can deal with the incoming Curses

; similar considerations may, rarely, lead you to gain a second Sea Hag in the midgame. The availability of a trash-for-benefit effect to eventually get rid of Sea Hag can also enhance its attractiveness. 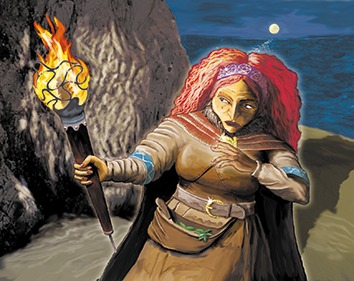 Way back when there was a card like "trash the top card of each other player's deck; they each gain a Confusion card, putting it on their deck." Confusion was like Curse

. Confusion left the main set due to not being different enough from Curse

(and also because it required 30 more cards to handle it). So all of the Confusion-giving cards vanished or were changed. It may not even be correct to say that that card inspired this one. Anyway eventually I tried Curse

-to-deck-top elsewhere, then moved it here as I wanted another attack and it fit the next turn theme. The discarding is just there so that multiple Sea Hags don't leave you with a stack of Curse

s on top of your deck.
—Donald X. Vaccarino, The Secret History of the Seaside Cards

People were telling me how little they liked Sea Hag from the moment it came out. Some people just didn't like that all it does it attacks. And it wasn't very good, and games where you did want it were miserable.
—Donald X. Vaccarino, Seaside 2E Previews 2